Logitech have just unveiled their G710+ Mechanical Gaming Keyboard, which the peripheral maker says combines high-speed non-clicking key switches with a dampening ring underneath eay keycap to reduce overall noise - somewhat of an annoyance with consumers and current mechanical keyboards. The G710+ uses keys with an actuation force of 45g and a distance of 4mm. The keyboard is lit up beautifully with white backlit LED keys, which are adjustable with one of four brightness levels, or if you're not a fan of LEDs, they can be disabled completely.

The brightness of the arrow and WASD keys can also be adjusted independently for better visibility under low-light conditions for those late-night gaming sessions. Logitech have also put the G710+ under some stress testing with professional gamers, partners, publishers and the everyday gamer. Logitech tout their their new mechanical keyboard can take at least 50 million keystrokes. 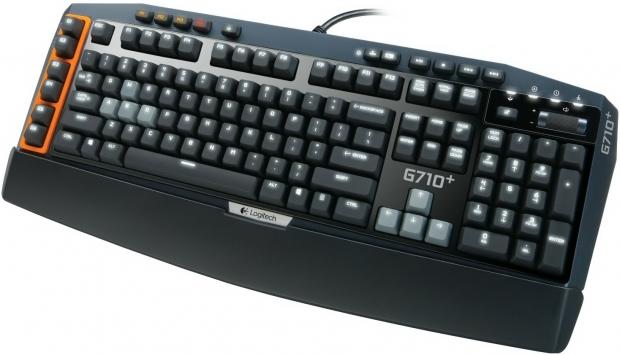 The Logitech G710+ Mechanical Gaming Keyboard will be made available in the US later this month, and it will drop in Europe in December. It comes with a suggested retail price of $149.99 and supports Windows 8, Windows 7 and Windows Vista.