Normally a DigiTimes report is preceded with the words "RumorTT", but this seems more serious, and more real than most of DigiTimes' reports as it makes a lot of sense. Intel is preparing the launch of their next-generation Haswell-based processors for sometime in 2013, and they'll baked into tablets, notebooks, ultrabooks, desktops, and servers - nearly every segment of the market. 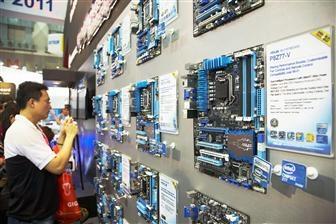 But, Haswell is designed by Intel to integrate functions such as power phase control - something overclockers use, into the CPU itself. This is of course worrying motherboard makers, as the overclocking market is a big thing right now, and a lot of players have boards designed purely for overclocking in mind. We're talking of nearly all big players - Gigabyte, ASUS, MSI, ASRock. This won't spell the end of their businesses, but it will most likely see a change in direction of how we see them sell their boards, and what features will set them apart from the others.

Intel won't push these changes into Haswell straight away, but will instead bake more chipset functions into the CPU over time. Right now, we're seeing motherboard players changing gears and pushing USB-based features, Thunderbolt, BIOS firmware features, and more in order to not feel stale, or similar to similarly priced motherboards from competitors.