Dell are unveiling more of their products as the release of Windows 8 draws closer, with a new business-orientated model. Dell have given it the name 'Latitude 10', and the company have baked in a fair amount of enterprise features, such as a user-swappable battery, a dock for improved productivity, and Dell Data Protection Encryption (DDPE) for security. 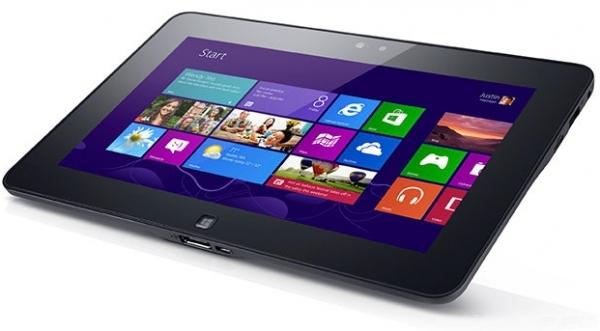 Dell's Latitude 10 sports a, you guessed it, 10.1-inch screen, bakes in Intel's Clover Trail SoC, 2GB of RAM, up to 128GB of flash-based storage, and a 30WHr battery. Unfortunately, Dell have opted for a 1366x768 resolution on the Latitude 10 which is disappointing, but they did include a Gorilla Glass-protected IPS panel. Latitude 10 boasts support for 10-point multitouch as well as an optional Wacom stylus.

Filling out the specs, we have an 8-megapixel rear-facing camera, 720p webcam for those voice calls and selfies, a full-sized USB port, microUSB port for charging, miniHDMI port, headphone/mic jack, a proprietary docking port, microSIM slot and a card reader. Dell's docking abilities give the Latitude 10 four extra USB 2.0 ports, gigabit ethernet, HDMI output as well as audio output. All of this is in a slate that measures 0.4 inches thick, and weighs in at around 1.5 pounds with the stock 30WHr battery. Dell are offering an optional 60WHr battery.

The battery is changeable, which is a great bonus. Dell are set to launch the Latitude 10 in October when Windows 8 arrives, but no pricing has been announced just yet.