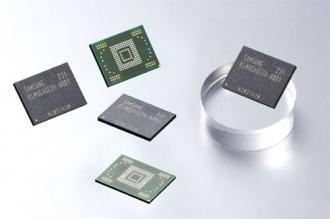 Samsung have hit a milestone that sees the first time 2GB LPDDR3 density chips are made available as an all-in-one package, since they sport four LPDDR3 chips stacked together. Samsung says that LPDDR3 will be a requirement moving forward, as mobile devices ship with faster and faster processors, higher resolution displays, and 3D graphics. Samsung have also pointed toward the fact that LPDDR3 features a transfer rate of up to 1600Mbps per pin, which gives us transmission rates of up to 12.8GB/s at the package level - compared to LPDDR2 that maxed out at 1066Mbps, makes LPDDR3 parts around 50% faster.

LPDDR3 will usher in the ability of allowing real-time viewing of high-quality video, without having to download the content first. Samsung have also teased that the mass production of 128GB eMMC for mobile devices, which will see the new products being much faster than their predecessors, while offering the increased storage space. Samsung's 128GB eMMC products will sport NAND with a toggle DDR 2.0 interface, built on a 20nm manufacturing process.

With this new technology being mass produced by Samsung, we should hopefully see more smart devices sport 2GB of RAM, as well as an option for 128GB models, too. This should hopefully push down the prices of 16, 32, and 64GB models.