If you're looking at picking up the new iPhone 5 like some of the TweakTown staff, you may have to wait a bit longer than you were hoping to get it in your hands. Pre-orders officially started at 12am PT today. Those pre-orders were offering a ship date of September 21, but with all of the demand, they've been pushed back varying amounts. 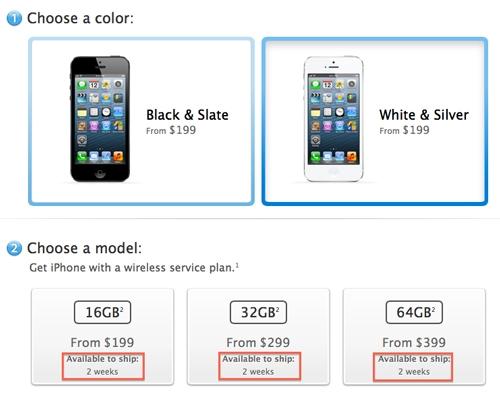 Pre-ordering your device through Apple will result in a two week delay before it is ready to ship, according to their website. Carriers, who had been quoting September 21 have now had to push back their estimated ship date as well. Verizon was first to push it back and started quoting September 26 as the ship date.

AT&T has now followed suit and pushed back the ship date quote to "14-21 business days." Fortunately, Sprint, my carrier, is still holding to September 21. This should roughly equate to demand for the iPhone on the various carriers. It would appear that Verizon had the most demand, at least in the beginning. That, or they may have ordered less stock than the others.