Twitter has seen a new record set thanks to Obama's acceptance speech at the Democratic National Convention. During yesterday's speech, Twitter saw an incredible 52,757 tweets per minute, the highest rate ever seen. The DNC has created quite a bit of talk on the social networking site, driving over 9.5 million tweets about #DNC2012. 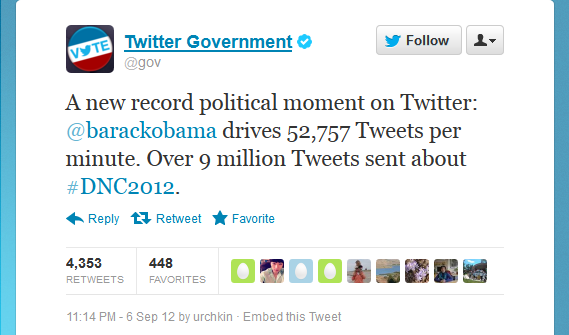 Yesterday alone saw 4 million of the 9.5 million tweets sent. Most of those 4 million were sent during Obama's speech. Four million tweets also rivals the total number of tweets that were sent about the Republican National Convention that was in full swing last week. Regardless of what your political views may be, Obama's clearly got the larger, more active following on Twitter.

According to CNet, several quotes from the president's speech proved tweetable:

It will be interesting to see what event manages to top this latest record. As more people join Twitter it becomes easier for records to be broken, so it's unlikely that this record will stay.