According to Chitika's latest August 2012 market share reports, Apple are absolutely dominating mobile web traffic, seeing their share of mobile traffic pass 65%. iOS completely smokes the competition, made up of Samsung, HTC, Motorola, LG, and "other". 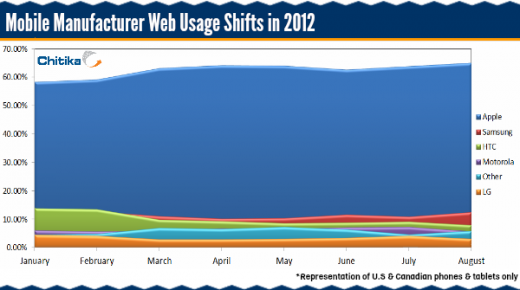 But, we're seeing Samsung release more and more devices, Motorola just announced three new smartphones today, and HTC should hopefully have a comeback with more than one device in the near future. The fight isn't over, and it never will be, but it is interesting to see just how much Apple's iOS platform dominates in mobile traffic.