Wondering how much Apple and Samsung paid in attorney fees for the trial? Well, we don't have those numbers, but we do have a breakdown of what some of their lawyers bill and an idea of how long they had to work for different things. Apple's lawyers spent a total of 232 hours working on just one motion for sanctions against Samsung. 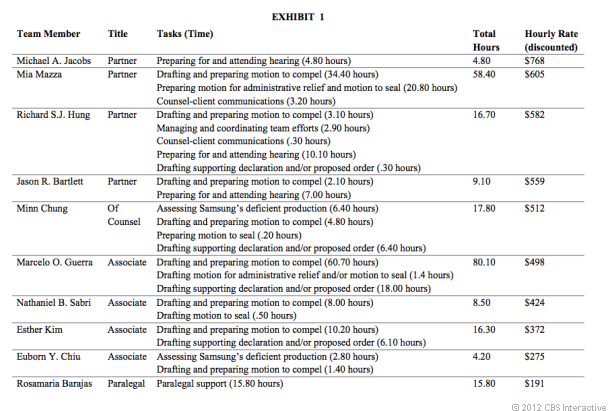 The bill for those hours? $116,668.50. Not bad, eh? Sounds like some of us need a change in career. And when it's all said and done, all of that money could come directly from Samsung, as often the other party is liable for attorney's fees in a lawsuit. That's minuscule when compared to the $1+ billion in damages, but only accounts for one motion. The entire trial was likely much, much more expensive.

Samsung, to not be outdone by Apple, has released information about its expenditures for three separate motions. The total, $258,200.50, is higher than Apple's, but was for three motions instead of one. Incredibly, one of Samsung's lawyers charges over $1,000 ($1,035, to be exact), which is more than a third more than Apple's highest paid lawyer.

Of course, the actual trial consisted of months of legal discovery and three weeks of trial time, so the total bills are much, much higher. It's likely we may never see the total tab, but it's easily in the millions.