CyberpowerPC has announced a new desktop PC called the Pro Gamer FTW. This new line of systems is "tailored for the seamless integration of gaming and live HD broadcasting." The new line features six different base models, the cheapest of which starts at a mere $1085. The systems also feature the option of NVIDIA or AMD graphics. 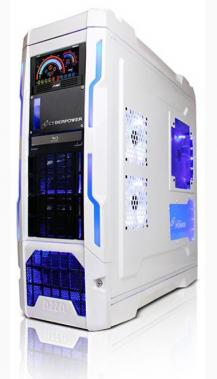 "They are powered by a choice of Intel's X79 Sandy Bridge-E platform, Z77 Ivy Bridge or AMD's FX Bulldozer processors; equipped with NVIDIA's overwhelming Kepler-powered GTX or AMD's astounding Tahiti series, and feature AVerMedia's innovative Live Gamer HD." This way, if you're in the Red, Green, or Blue camp, Cyberpower has you covered.

Cyberpower brags that "every system is meticulously built with precise cable routing to ensure optimal airflow and a clean aesthetic appearance" and this one should be no different. Housed in the massive Azza Genesis 9000, there's plenty of rooming for cooling and high-end components. The machines are also highly configurable:

For more information, or to order your own, head on over to CyvberpowerPC's website.