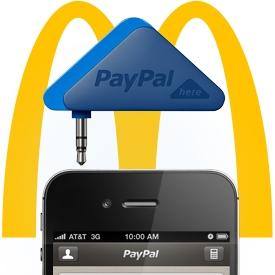 McDonald's have been testing out PayPal at 30 of their restaurants in France, and also used the service earlier this year at their franchisee conference in Orlando, Florida. A McDonalds spokeswoman has confirmed the France tests, and said that the PayPal-based demonstration at their conference was part of a booth that features "technology coming within the next 24 months or so".

McDonald's France test included being able to order food on smart devices through a McDonald's mobile application, or online, where you'd pay with PayPal. PayPal with McDonald's would make it even easier to place your order, and pick it up, as you'd be able to cut lines in the restaurant itself. Gil Luria, an analyst at Wedbush Securities has said that "if they can shave 10 seconds off wait times, same-store sales could go up a lot".

Considering McDonald's has over 30,000 stores across the world, having another payment option like PayPal would be great. It would also show the world just how far PayPal have come in the last couple of years, too.