Quick, Instagram has been updated, better go out for lunch or dinner and snap a photo! I kid. But, Facebook's acquisition of Instagram hasn't stopped the photo-sharing service from hitting version 3.0, where there's some nice updates. 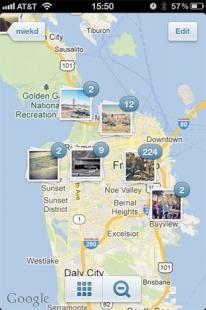 Instagram has smashed through 80 million users, and has unveiled a new user interface (UI) overhaul today, where geolocation is a very important part of that. Geotagging has its benefits, but the gem here is most likely going to end up being a Photo Maps view. It overlays photos with a map underneath, showing users where they've taken their photos, very cool.

Instagram 3.0 also adds "mutli-line caption editing, more streamlined photo uploading, speed improvements and infinite scroll". There has been a removal of something quite strange, the Twitter "Find Friends" feature, which is due to Twitter turning off their API to Instagram last month, I wonder why. Instagram user? Your thoughts on the new version?