The Motion Pictures Expert Group (MPEG) has released a new draft which should see the release of a new video codec, H.265. The proposed High Efficiency Video Coding (HEVC) looks to save on space by up to 50% of the current MPEG-4 H.264 standard, with its aim of reducing the amount of bandwidth used by online video applications, making room for more. 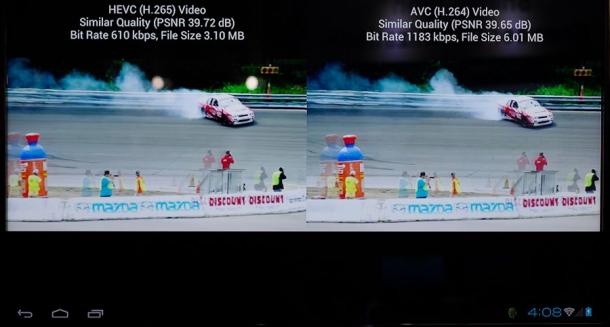 A group of 450 people met in Stockholm during July in order to approve the new codec, which if adopted, would see double the amount of TV channels broadcast, all in the same amount of spectrum. Per Frjdh, chairman of the Swedish MPEG delegation and manager for Visual Technology at Ericsson Research has said it will "have an enormous impact on the industry", and rightly so. He also notes that it is currently predicted that video could account for "90 percent of all network traffic" by 2015.

Frjdh also believes that the new HEVC format could see a launch in the commercial product space as soon as next year. Apple would hopefully be an early adopter in H.265, as they were in H.264. Nokia and Microsoft also recommend H.264 as an alternative to plugins for video in the HTML5 specification. We should hear more about H.265 over the coming months.

The above screenshot has Qualcomm showing off some H.265 tech that squeezes a video into close to half the file size. Impressive.