Apple.pro have posted scans from Chinese-language newspaper Apple Daily showing off the new "iPhone 5" enclosures that have been available for the past couple of weeks, and even went as far as taking measurements of them. 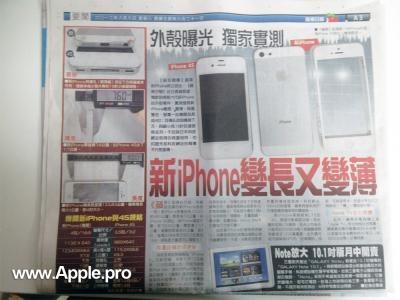 The thickness of the next-gen iPhone enclosure measures in at 7.6mm, with the rest of the dimensions appear to be equivalent to the specifications that are making the rounds of sites across the world, and the same as the leaked specs by case manufacturers in June:

One manufacturer we spoke to said that he was sure that the leaked images were accurate - so sure that he was already preparing to construct iPhone 5 cases and he'd be willing to ship replacements for free if they turned out not to be perfect. He enumerated three big changes from the old iPhone 4S to the iPhone 5:

2. The earphone jack has been relocated to the bottom of the phone.

3. The dock connector is much smaller, similar in size to micro USB.

Apple's current iPhone 4S measures in at 9.3mm in depth, so a 7.6mm thin iPhone would make the next-gen iPhone 18% thinner than the 4S. The width of the new iPhone is expected to be the same as the 4S, but it will increase in height in order to take the 4-inch diagonal screen.