Samsung have started mass production on a slew of new mobile flash memory chips that could give us nearly four times the speed of current chips. Samsung's Pro Class 1500 high-speed embedded memory will hit 'SSD-like' speeds in read/write operations in smart devices with capacities of 16, 32 and 64GB. 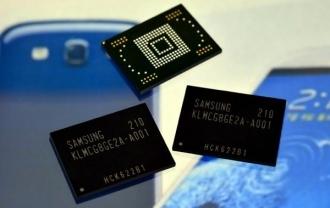 With smartphones already reaching 2GHz clock speeds running four cores, the CPU can't be the one to do all of the heavy lifting and continue to make the device feel fast. The job of system RAM is to keep an eye on all open programs, and if this part of the device is lacklustre, you'll feel it. Samsung have claimed that the new flash modules can reach speeds of up to 140MB/sec with write speeds hitting 50MB/sec at 1,500 IOPS writes and 3,500 IOPS reads.

Samsung seem to have leant on multiple technologies in order to reach these speeds, such as the 20nm manufacturing process, quick toggle DDR 2.0 memory that sports its own controller and a new JEDEC memory standard. At the moment there's no ETA when we should expect this tech to be baked into devices, but it shouldn't be too long.