If you've been holding out for the sequel to the Galaxy Note, you've got just a bit longer to wait until you can feast your eyes on it. Invitations to an event being held in Berlin have started being sent out. The event is just a couple of days before the IFA trade show starts, which is where the last Galaxy Note was revealed almost exactly one year ago. 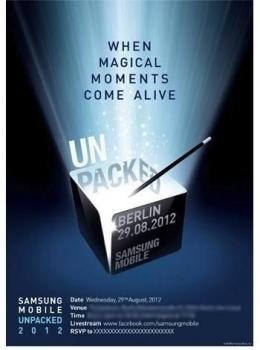 Samsung is likely trying to take away some of Apple's thunder that is expected to come with its release of the new iPhone 5, rumored to be in September or October. Samsung recently overtook the top spot for smartphone makers after lagging behind Apple. In the last quarter, Samsung shipped around double as many smartphones as Apple.

The event, planned for August 29, will see the new Note released: "We plan to unveil the next Galaxy Note at the Samsung Mobile Unpacked event in Berlin on August 29," a Samsung spokesman said on Friday. The new Note is rumored to feature a 5.5-inch unbreakable screen, a faster CPU, and a much better camera.