Research firm Strategy Analytics has some new numbers for everyone to peer at, with the US Android handset sales dropping in Q2, but iOS sales went up. Overall, smartphone shipments for all manufacturers fell a little, by 5-percent to 23.8 million, compared to 25.2 million from the same quarter last year. 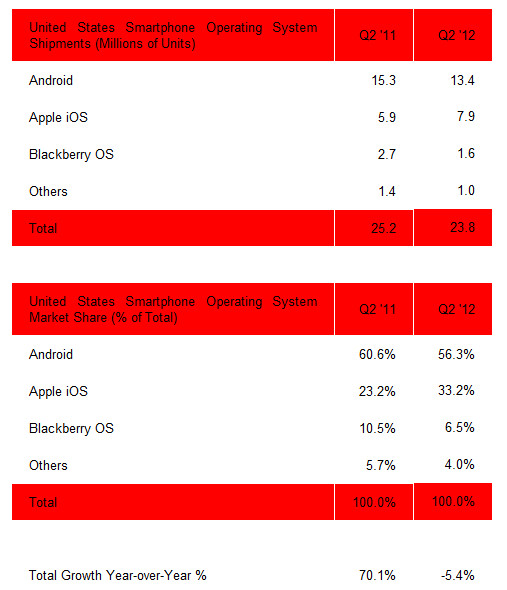 These changes in numbers are attributed to a combination of things, such as a volatile economy, and changes in upgrade policies by major carriers. Android sales in Q2 2011 were 15.3 million, taking up 60.6-percent of the market. This year, with the launch of flagship models such as Samsung's Galaxy S III, Android-based phones managed just 13.4 million sales, with 56.3-percent of the market, representing a drop of almost two million handsets over the period.

iOS was the only platform to not lose its footing, where it rose by nearly two million units, the same number Android lost, to reach 7.9 million units sold. It also increased Apple's marketshare from 23.2- to 33.2-percent, even with rumors of a new iPhone coming in the next few months. BlackBerry OS lost a million sales or so, and shrank to 1.6 million, or just 6.5-percent of the current market. This is believed to be the lowest market share RIM has ever had in recent history.