We had a another RumorTT post on the upcoming Samsung Galaxy Note II last month, where we heard it would have Samsung's quad-core Exynos processor inside, but it looks like those rumors are now materializing as we get closer to its impending release. 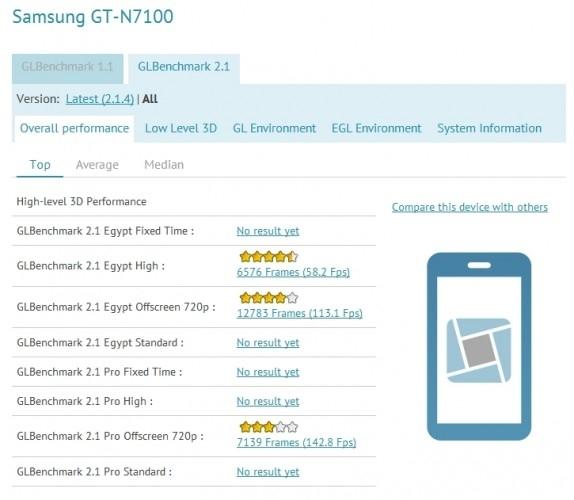 Some numbers have just shown up in the form of some test results uploaded to GLBenchmark, which let's us report that the Galaxy Note II should sport a 1.6GHz quad-core Exynos processor, clocked 200MHz above its little brother the Galaxy S III. The Galaxy S II was clocked in at just 1.2GHz and was only a dual-core chip, while the original Note was clocked in at 1.4GHz and also just a dual-core chip.

The benchmark scores show that the Note II is a little faster than the Galaxy S III. The screen resolution tested on the device was 1280x720, which is a 16:9 ratio compared to the original Note's 16:10. This goes hand-in-hand with previous rumors of the Note II featuring a slighter bigger screen. I've already taken a stab at the 5.5- to 5.6-inch range. Another good note on the Note II (geddit?) is that it looks to be running that sweet Google OS, Android 4.1 Jelly Bean. But, that seems obvious at this point, for Samsung to launch a flagship phone without Jelly Bean.