According to analyst Horace Dediu of Asymco, who has used a chart to show the ratio of PCs to Macs sold each year since the early 1980s. The chart shows Apple's temporary victory, as well as teh meteoric rise Microsoft took in the mid-2000s. But, we're seeing Apple's resurgence over the last 8 years or so. 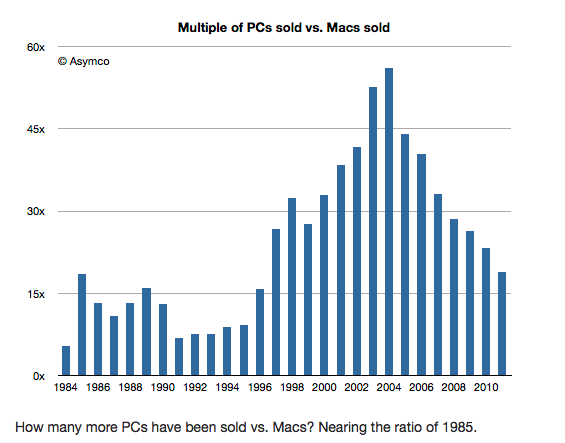 This chart shows that the ratio has fallen back to level not seen since the mid-90s. A very important note, is that this chart only shows PCs vs. Macs, actual full-fledged computers that Apple doesn't really sell that much of. Another fact is that if the chart included iPhones and iPads, which given the constantly blurred lines of "what is a PC", the chart would be much more interesting.

We know PCs thrash Mac sales, but this would be more BYO (build your own) versus off-the-shelf systems from Dell, HP, and co. We know that Apple are definitely on their way back, but I think we have a long time before they'll ever see the numbers that Windows-based systems do.