The day is finally here, Valve have announced plans to finally release the very long-awaited introductory video for the Pyro in Team Fortress 2, the intro video coincides with a large update to the popular game. 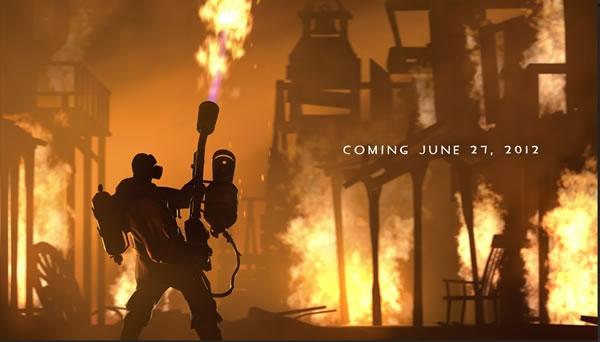 Valve has released some details of their three-day "Pyromania" event, with the first day bringing us a new map as well as a new game mode called Doomsday". Doomsday pits two teams against each other to compete for "the honor of transporting a suitcase nuke full of recalled Mann Co. Australium to American monkeynaut Poopy Joe's rocket, so he can blast off and hunt down Soviet space chimp Vladimir Bananas."

Both teams have to haul fuel up a slow-moving elevator elevator and dump it into a rocket, which then bursts off upon succeeding the mission. Players can also now earn 11 new "Astro-chievements", the names of which can be viewed on the day one event page. Valve have plans to release the Meet the Pyro video on Wednesday, which will conclude their "Meet the Team" series.