Facebook is adding subscription billing which should allow app developers to make even more money from their most loyal users. Starting next month, app developers will be able to create special plans or content that is available with a monthly fee. The lowest monthly fee that can be offered by a developer is a mere $1. 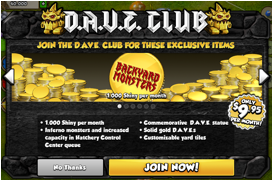 Kixeye is a perfect example of how developers can take advantage of the new system. Kixeye is planning on having a $9.95 per month subscription plan that will give subscribers access to exclusive in-game items. They are focusing on a smaller subset of players that are more inclined to pay which should yield an interesting revenue stream.

In other news, Facebook is backing away from Facebook Credits as the main currency. Just a few years ago, Facebook was pushing Credits so that Facebook and online shopping would become linked in people's minds. This, unfortunately, prevented developers from using their in-game currency for purchases.

"Most games on Facebook have implemented their own virtual currencies, reducing the need for a platform-wide virtual currency," the company said in a blog post. Facebook has said that they will convert any user's remaining credits into the currency of whatever game the user would like.