If you'll remember back to our pre-Computex coverage, we explained how there would be a panel of overclocking experts at GSKILL's booth. Those overclockers weren't just there to look good and answer questions; they were actually overclocking and attempting for some world records. During Computex 2012, they managed 5 new world records. 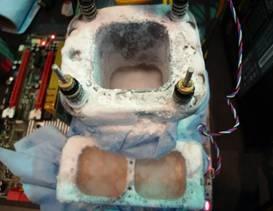 During the overclocking live show at Antec booth, the renowned overclocker at HKEPC, John Lam, also broke the DDR3 memory frequency world record with extreme speed of 3842MHz, using G.SKILL TridentX memory and Gigabyte GA-A75-UD4H motherboard. This impressive achievement has been validated by CPUZ and is also currently listed as the top score of the highest RAM frequency reached.

The results are incredible. It takes a lot of skill to become one of these top overclockers which is why they fared so well in regards to setting new records. It's only a matter of time before new hardware and newer overclocking techniques come out which will manage to beat these scores. And trust me, I'll be there to report it.