Computex 2012 - Walking around the halls today we spotted a motherboard with the model name "Hacker" and it made me stop and pay attention. 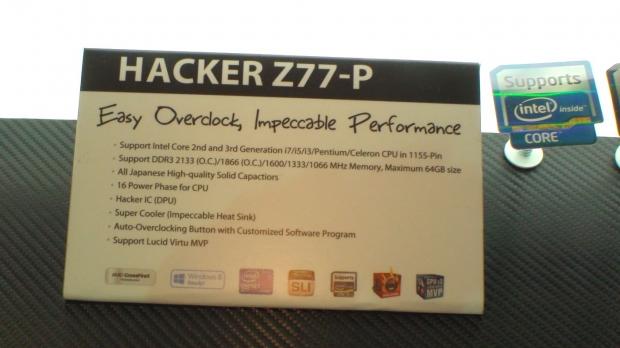 The company in question here is Wibtek, a long time Chinese motherboard producer who has only just entered the retail motherboard market at the end of last year. We often walk the show floor each year and see loads of motherboard makers, but they usually don't interest that much with their non-enthusiast entries.

Wibtek was different though as they did get our attention for the Hacker Z77 and Hacker Z75 based motherboards. This is Wibtek's first attempt and creating an enthusiast motherboard and by the looks of things, they are off to a fairly positive start. They are marketing their Z77 board as offering easy overclocking and impeccable performance. They add in an Auto-Overclocking Button with customised software along with a Hacker IC which is something we need to check out more before we can comment on it properly.

Judging by the board design, they will get the attention of buyers who usually turn to the likes of ASUS, MSI, GIGABYTE, ASRock and others, but do they really have what it takes to compete in a global market that is already tightly controlled by the aforementioned companies?

Only time will tell, but you're seeing the boards here on TweakTown, which means Wibtek has our interest peeked, at the least.