Computex 2012 - Again we walking the hall of Computex Nangang early we manage to bring you another exclusive and this time it is our very first and quick look at the upcoming ASRock Z77 OC Formula.

This is ASRock's first motherboard that designed especially for overclockers and it has a lot of design influence by new star recruit Nick Shih who really only joined the Taiwanese motherboard maker not that long ago. The board features a rather stylish black and yellow color theme which did remind me fairly quickly of something that you'd see in the Transformers movie. 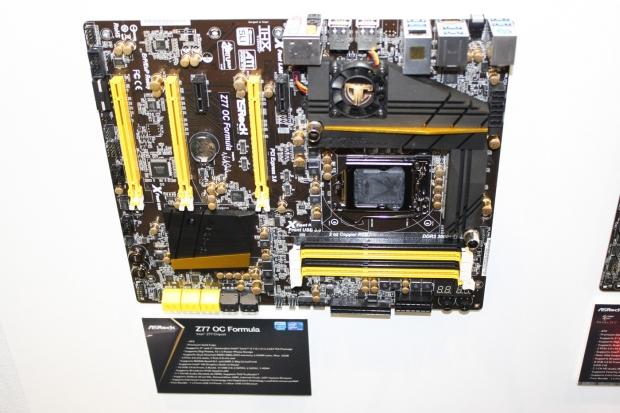 Not that the color and resemblance is of any real importance as Nick Shih is a very well-known overclocker who knows his stuff and judging by Nick's signature on the PCB, a lot of his time and effort has gone into working with ASRock engineers to produce a board with his name on it. Besides the apparent overclockability of the Z77 OC Formula, the one big thing that excited me was that fact that this motherboard has no less than 10 USB 3.0 ports onboard.

The cooling setup looks rather impressive with support for water cooling along with the fact that this board appears to use all gold solid capacitors. This has just been our quick and early exclusive look at the Z77 OC Formula. Later in the week at Computex we will re-visit the ASRock booth and kidnap Nick Shih to give us a full run down on his new motherboard. Cool stuff!