Computex 2012 - Yesterday we managed to sneak into the Nangang hall at Computex and what follows is first of the many exclusives we managed to find during the Day 0 setup of Computex. 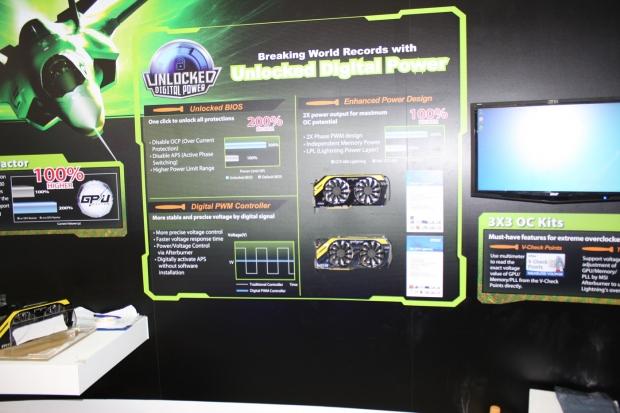 We walked around the hall as everyone was busy setting up for the show and our first stop we walked into the MSI booth where on display was their upcoming NVIDIA GEFORCE GTX 680 Lightning video card. It features some wicked MSI workmanship including an unlocked BIOS to disable everything, that is all the protections that hinder overclocking and allow you to go for your life. Things such as disabling Over Current Protection, disabling Active Phase Switching and an increased power range limit is included.

Not only that but the GTX 680 Lightning features a digital PWM controller along with what MSI calls an enhanced power design which allows for "2X power output for maximum OC potential".

A lot of this comes down to the amazing cooling that is featured on the 680 Lightning along with all of the quality parts and components that go onto MSI video cards such as this one. Enjoy the exclusive pictures above - in the image above you can see two of the video cards running in SLI to power a demo of an upcoming benchmark for Windows 8, but we cannot show you that until a little later.