Are you a US resident sad that the rest of the world is getting the Samsung Galaxy S III before you? Well, you won't have to wait much longer as T-Mobile and Verizon have confirmed that they will be getting the devices just hours after Samsung announced it would be coming to 5 carriers in the US this month. 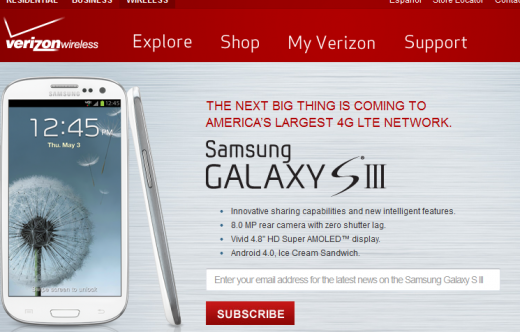 The kickass new device will be available on T-Mobile from June 21 and come in Pebble Blue and Marble White. Verizon was actually the first to announce the availability, but T-Mobile has set an actual date. T-Mobile has not announced pricing for the new device as of yet, but you can be reminded by signing up on their website.

Verizon, on the other hand, will be accepting pre-orders from June 6 on. The device will make it into stores and online in the following weeks, but no specific date has been given. We do know that it will come in 16GB and 32GB versions for $199 and $249 respectively. The new device will also require a 4G LTE data package which starts at $30/month for 2GB.