Apple's next-generation mobile operating system, iOS 6, is expected sometime in the coming months, but BGR is reporting about their Maps app which will support 3D mapping. Apple aren't using Google's mapping data this time around. 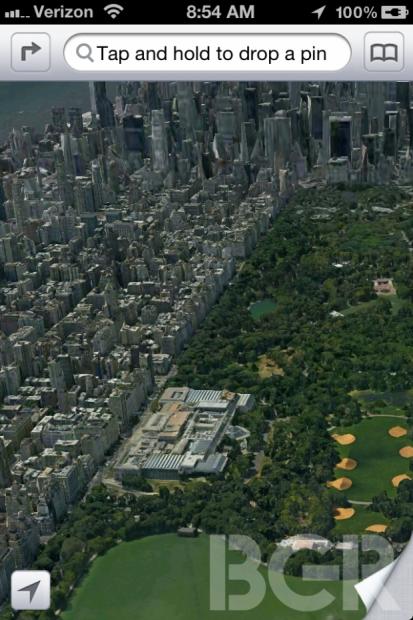 BGR has sourced some exclusive information, and photos, of Apple's new Mapps app, with the app featuring an updated user interface as well as a brand new navigation bar. This bar is said to be silver instead of blue. The current Maps app follows the normal blue iOS color scheme, but it looks like Apple could move toward a silver theme for iOS 6, like the iPad.

The iPhone Maps app has a floating 'locate me' button in the bottom left corner. In order to access 3D mode, you'll have to peel back the lower right corner of Maps. Once 3D has been enabled, you can switch in and out of 3D mode by tapping a 3D icon in the lower left hand corner. Apple's acquisition of C3 Technologies has helped them back 3D mapping into their Maps app, which should be a great feature in the new iPhone and iOS.

Apple are currently testing, and putting the final touches on its 3D mapping functionality, with it being tested in build 10A3XX of iOS6. BGR does state that the above image is a mock up based on what Maps should look like, as their source has told them.