Ever see a game on Facebook that looks interesting but you don't want to play it because of all the hassle of installing and uninstalling if it's bad? Facebook is looking to change that with a new feature which will allow game developers to demo their wares in the news feed. Developers won't be given any information about the users. 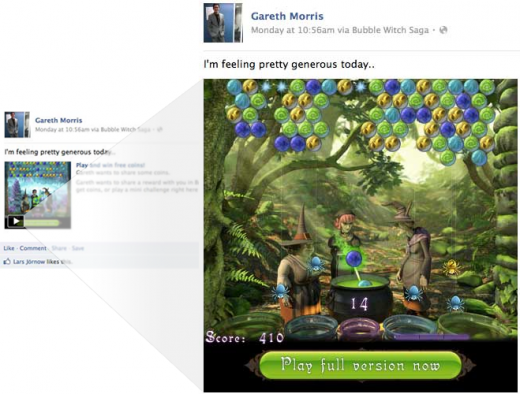 If players like the game then they are able to click through onto the full version. This new feature is great, although I'm not sure that the news feed is a proper location for it. Personally, my news feed is already overflowing with the posts of my friend and the posts of quality content here on TweakTown, so I don't think I want more posts, especially ones that take up a lot of room.

Facebook has provided some examples of games already using the new feature. These games include: Idle Worship, Angry Birds, and Bubble Witch Saga. Developers of these games receive statistics about impressions of the story and how many people use the game contained within. Facebook has provided examples of how current games are using the new feature:

The new feature will most likely aid developers in gaining an audience as it reduces the hassle of trying a new game. But it will only be useful if game developers make good use of the content they provide in these bite-sized previews. The game has to be engaging enough to encourage full installs, but has no access to user data to do so. Quite the quandary.