Microsoft is getting their hands dirty with Windows 8, and one of the things they're tweaking at the moment is the way the next-gen operating system manages multi-monitor setups, starting with the next major release of their OS.

Mark Yalovsky, a lead program manager on the User Experience team, had gone into detail explaining some of the features that have already been baked into the Consumer Preview, such as taskbar options for multiple displays, and some that will change like the ability to launch Metro apps on any display - but this post has been taken down.

Microsoft have collected data through the Windows Feedback Program, which points to 14-percent of desktop PCs and approximately 5-percent of laptop PCs sporting multiple monitors. Microsoft have taken this information, and made multi-monitor support better in Windows 8. They have set themselves a few goals: make the desktop a more personal experience, improve the efficiency of accessing apps across monitors, improve the efficiency of accessing system UI, and allow side-by-side Metro style and desktop apps. 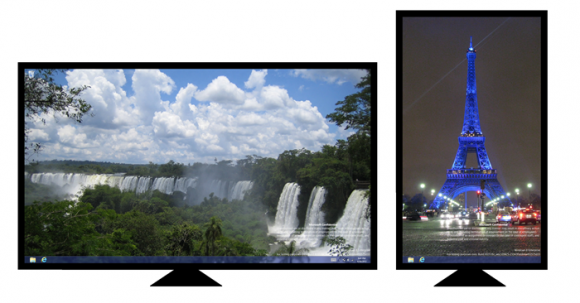 The upcoming Release Preview of Windows 8 includes making the corners and edges alive on all monitors, versus just the main screen. This means that you'll be able to bring up the Metro Start screen, the charms, and app switching on any monitor by just invoking them from each monitor's corners. In order to launch or move an app to a specific monitor, there are plenty of options. You could bring up Start on a specific monitor and launch an app, drag and drop it across monitors, use keyboard shortcuts (Win + Pg Up and Win + Pg Down) to move them between monitors, and more.

Microsoft have also said they've improved mouse targeting along with shared edge so you won't glide onto the second screen and miss the UI controls.