Is your current home wireless fast enough? No? Well, maybe you should pick up a new router based off of the technology that some researchers in Japan are working on. They have smashed the current record for transfer speed by double. Last November, chipmaker ROHM transferred data at 1.5Gb/s using a frequency of 300GHz. 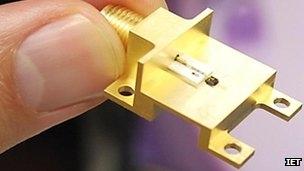 The researchers have smashed that, however, by managing an incredible 3Gb/s. Unfortunately, due to the super high frequency, the farthest the data can travel before being affected by interference is about 10m, or 30ft for us Americans. The researchers managed this feat by using 542GHz radio waves which oscillate faster, hence can carry more data.

The technology required to operate in the terahertz region (300GHz-3THz) has always been too bulky and expensive to be of any value. It would have been near impossible to tuck inside a smartphone due to its size and power draw. This new work uses a 1mm^2 resonant tunnelling diode, or RTD, which significantly reduces the size and power requirements.

It's not likely to be coming next year, but this new wireless technology could eventually find its way into devices. As long as the distance doesn't need to be far, utilizing the terahertz spectrum could very well allow for large, direct file transfers at incredibly high speeds. This could also work very well for home theater systems.