Diablo III launched last night, and for some, it was OK and working. For others, Error 37 plagued many. The various server load issues stopped people from creating characters, starting the game, joining others, or launching into the game at all. 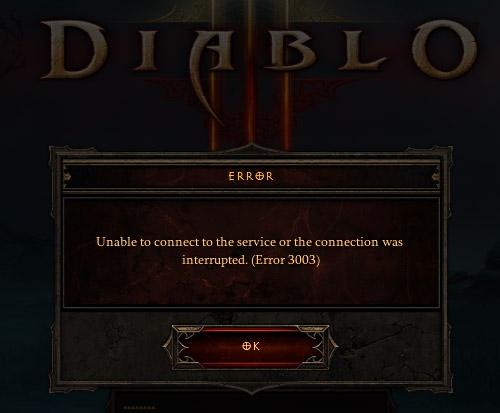 My game launched with one issue where I couldn't create a character, I logged out, logged back in and I was ok. The game crashed a few times, but I put that down to my NVIDIA Surround setup, and requiring new NVIDIA drivers. The game is delicious. Sexy. Addictive. Awesome. It's PC gaming, and it's here, right now.

But there's a new error on the block, Error 3003 which says "Unable to connect to the service or the connection was interrupted". This is the problem with Internet-required games, is that if there are any server-side issues, like most people have experienced with Diablo III, then it pisses a lot of people off. Let's hope it only gets better from here, shall we?