The Chinese have beamed up Scotty. Starting in 1997, researchers have been able to quantum teleport photons, where a record was set by researchers at the University of Science and Technology of China in Shanghai.

Two years ago, this team successfully transported a photon over 16km. This same team has just released some new findings, where they've claimed to have teleported photons nearly 100km, or over 60 miles. Incredible! 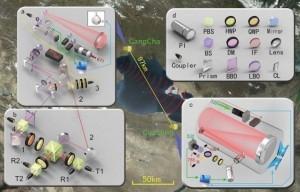 How the process works is when a photon is teleported, they aren't physically transporting the proton, but instead the information that is contained in it through quantum entanglement. The second photon at the end of the teleport then becomes the first one, or the identical qubit of information. This means that information is exchanged, all without any physical movement.

This would be perfect for information, instead of it travelling through cables or satellites, information would stay in a single place, shoot across the other side of the planet (or solar system?) and recreate itself in its intended position. This is because quantum teleportation has to be done in free space. Fiberoptics just don't work because once you go over a distance of around 1km, the fiber absorbs so much light that the information is lost.

This means that lasers are required. Using a powerful enough laser, along with other optical equipment, the researchers have developed a technique where they can keep the beam focused over the course of an insane 97km, and successfully achieved quantum teleportation.

So now we have quantum teleportation reaching 60 miles, considering that geosynchronous satellites orbit at around 22,236 miles in the air - we have a fair way to go. My next question is, what would the military and privately-owned corporations be messing with, if this is what researchers at a university can do? The mind can be blown, quite easily.