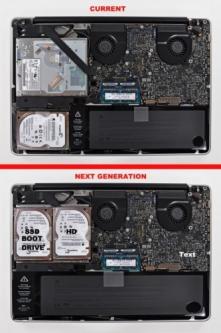 It's important to note that the picture above is a mock-up and not an actual photo of the upcoming MacBook Pro 2012. The rumor we are dealing with today says that Apple will be ditching the optical drive in the next iteration of the MacBook Pro. As Apple has proven the CD-less model works using the MacBook Air, this isn't out of the realm of possibility.

Ditching the optical drive will leave a gaping hole in the chassis, so one might think that the case will get a size reduction similar to the Air. The rumor states that this is wrong and that instead the MacBook Pro will be getting a larger battery along with a second drive. The two drive system would provide one SSD for boot only and a standard HDD for everything else.

A larger battery, somewhere in the neighborhood of 30% more capacity, could provide days of battery life, or support a more pixel-dense display. This rumor seems logical as MacBook Pro users love the larger screen and higher performance processor. The rumor says to expect both of these additions this summer.