With the launch of Ivy Bridge successfully completed, other companies now get to launch their new equipment that compliments the features of Ivy Bridge. One of the first up in the RAM department is G.SKILL. G.SKILL is no noob when it comes to high performance RAM, so these new sticks are expected to amaze. 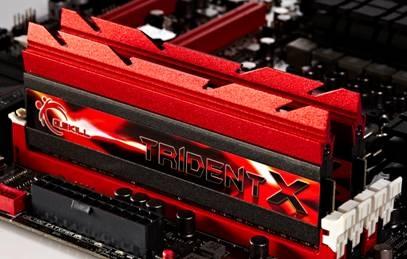 And, they do! The modules feature some innovative features such as removable heat spreaders and are overclocking headroom, even with their already high stock speed. The new modules range from from 2400MHz 8GB to 2800MHz 16GB. According to the release, "the TridentX 2800MHz 16GB kit has successfully achieved DDR3 3320MHz speed," so these modules are no slouches.

The full press release can be seen below:

Featuring with a removable top fin design, the new TridentX heat-spreader allows overclocking enthusiasts to have more flexible options of memory cooling systems, as well as to reduce the height to fit with large CPU coolers. For detail guideline, please visit the following link.

All G.SKILL TridentX kits come with the latest Intel XMP 1.3 standard developed for the Z77 platform. It provides PC enthusiasts an entirely trouble free overclocking experience to boost their Z77 systems for extreme levels of performance, while retaining system stability.

All G.SKILL memory products come with a lifetime warranty and the G.SKILL technical team is always ready to provide consumers with complete technical support via online forums, telephone and email.

Established in 1989 by computer hardware enthusiasts, G.SKILL is a leading memory & Solid State Drive manufacturer based in Taipei, Taiwan. The company's top priority is quality. All of the products undergo a series of the most rigorous tests and strict quality control processes. In addition to a committed, qualified IC testing house to examine the products, all G.SKILL products are 100% tested to ensure the highest yield, reliability and quality