Team Green stamped down their whoop ass foot a few weeks ago when they launched their GEFORCE GTX 680, and now AMD are returning the favor by not only dropping prices on the HD 7000 series cards, but offering three free games for any purchase of the HD 79xx cards. 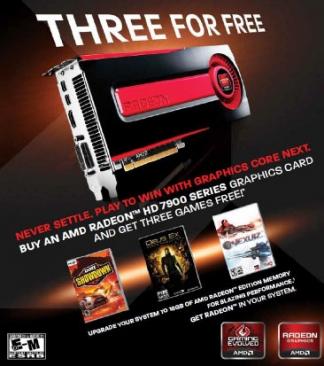 The name of this promotion is called "Three for Free", because, well, that's what it is. If you purchase a HD 7950 or 7970, you'll receive Dirt Showdown (when it drops in May), Nexuiz (again, in May) as well as Deus Ex: Human Revolution (as well as the Missing Link DLC pack), which hits in May too. If this is not enough, the offer lasts up until April 30th, and you have up until May 31st to download the respective keys to the games listed above.