The group that everyone has secretly been cheering for has a new branch in China. An Anonymous China Twitter account was created late last month and endorsed by the official Anonymous account. Shortly after all of this, they went to work. Now hundreds of Chinese government, corporation, and other websites have been hacked. 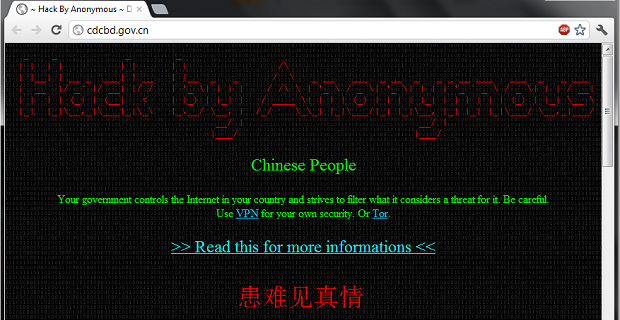 A Pastebin post explains why they are doing this:

Hello, we are Anonymous.

All these years the Chinese Government has subjected their people to unfair laws and unhealthy processes.

People, each of you suffers from tyranny of that regime.

In the defaces and leaks in this day, we demonstrate our revolt to the Chinese system. It has to stop! We aren't asking you for nothing, just saying to protest, to revolt yourself, to be the free person you always want to be! So, we are writing this message to tell you that you should protest, you should revolt yourself protesting and who has the skills for hacking and programming and design and other "computer things" come to our IRC: https://2.webchat.anonops.com/ channel: #GlobalRevolution .

We do not forgive.

We do not forget.

Many of the hacked websites were just defaced, however, others were slightly more serious. On one of the websites hacked, Anonymous released a list of e-mails and phone numbers as well as the admin login details to the site. The hacks went for several days on some of the sites, at last check, were still defaced.