Design firm Coque Design have reportedly worked on illustrations for certain features of the PlayStation 4 (or whatever they call it). The pictures have since been removed, but were labelled 'Illustrations & Sketches for new PlayStation Orbis features". 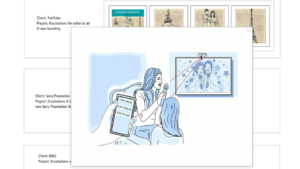 If you haven't yet read about it, Orbis is the codename for Sony's next-generation PlayStation console. The photos show several people moving around in front of a motion-sensing device, like Sony's EyeToy or Microsoft's Kinect, that rests on a television. It shows a person using what seems to be a smart device to control music that may be linked to the game system also.

Not much info apart from the picture itself and an explanation is available, but this news is just adding to the collection pile that is PS4-based news. More as it comes.