Our Solar System is an absolutely mind-blowing thing, and I personally believe we haven't even scraped the surface in terms of our knowledge base on it. There are things that we (the normal people, not NASA high-ups or anything) couldn't even begin to comprehend, let alone know the ins and outs of things we have no idea about. 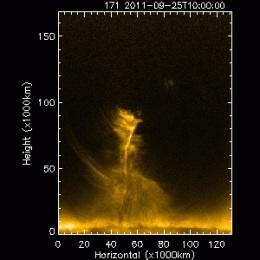 The latest dance our closest star is doing is letting out solar tornadoes that are several times as wide as the Earth, and are generated in the solar atmosphere. The new data was discovered using the Atmospheric Imaging Assembly telescope that is onboard the Solar Dynamic Observatory (SDO) satellite.

This is perhaps the first time that such a huge solar tornado is filmed by an imager. Previously much smaller solar tornadoes were found my SOHO satellite. But they were not filmed.

Dr. Huw Morgan, co-discover of the solar tornado chimes in with:

This unique and spectacular tornado must play a role in triggering global solar storms.

What exactly was seen? Well, the Atmospheric Imaging Assembly saw the superheated gases as hot as 50,000 - 2,000,000 Kelvin sucked from the root of a dense structure called prominence, and spiral up into the high atmosphere and travel around 200,000 kilometres along helical paths for a period of at least three hours. These tornadoes were recorded on 25 September 2011.

These hot gases can reach speeds of 300,000km per hour, with gas speeds of terrestrial tornadoes capable of reaching 150km per hour. These insanely hot, insanely fast tornadoes can occur at the root of huge coronal mass ejections (CMEs). If they head toward our Earth, these CMEs can cause catastrophic damage to Earth's space environment, satellites, or even knock down an electricity grid.