It's been a fairly busy day for the TweakTown Taipei team with a visit to GEIL and then we headed on over to MSI who were nearby.

We were shown a few products during our meeting, but the one that stood out to us the most was their upcoming Z77A-GD80 motherboard, which you can get up close and personal with in the video we embedded above. This board supports the upcoming Intel Ivy Bridge processors which if you have been reading TweakTown this past week, you know quite a bit about now. 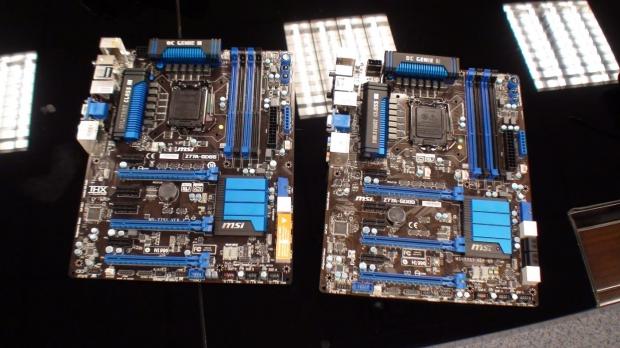 What's probably the most interesting feature of this motherboard is that it comes with a Thunderbolt connector. It's the first time we've seen a Z77 board with Thunderbolt onboard and that's pretty impressive. We have heard rumours around Taipei of more boards including Thunderbolt, but at this stage of the game, MSI is out in front in this department.

The chip onboard to provide the Thunderbolt supported is made by Intel, we're not exactly sure what chip it is, but it's labeled with W138TA17, if that means anything to you. It doesn't have any form of cooling (even passive), so we would assume that the chip doesn't get that hot to warrant it.

We really look forward to checking out Thunderbolt performance on this motherboard especially comparing it against the numbers we get from USB 3.0, SATA 3.0 and eSATA. Stay tuned for that in the weeks ahead!