Everyone seems to be getting excited regarding Samsung's upcoming GALAXY S III phone. And why shouldn't they? With all the rumors flying around the internet, it appears to be a damn nice phone, filled with some incredible features such as a rumored 1920x1080 screen! Rumor has it that the phone pictured below appeared in an ad for Visa. Rumor also has it that the phone pictured is the new Samsung GALAXY S III! 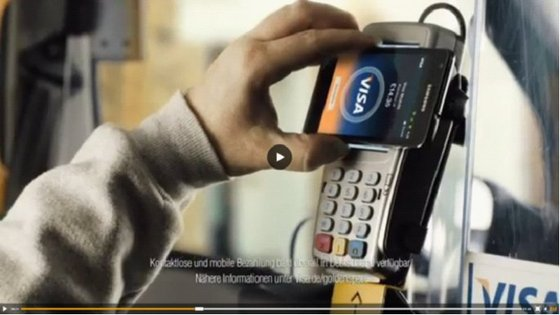 No specific launch date for the phone has been confirmed, or even rumored, as far as I am aware. Yet, it seems that the phone has appeared in the commercial. A few key details lead us to suspect this. First, it looks fairly wide. Second, it appears to be lacking a Home key. Both of these are part of the rumors that have been flying around. What are your thoughts? Is this a legitimate photo of the upcoming phone? Or is it just the GALAXY S II? Let us know!