OK, I'll admit it: I'm scared of heights. I live in a two-storey house and can barely look over my balcony without feeling scared. But this, this is just absolutely insane! Enter "Fearless Felix" Baumgartner, who has jumped 2,500 times from planes, and helicopters as well as some of the world's highest landmarks and skyscrapers, such as the Christ the Redeemer statue overlooking Rio de Janeiro, the Millau Viaduct in southern France, and the 101-story Taipei 101 tower in Taiwan. 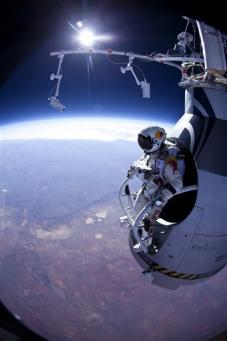 This summer, Baumgartner hopes to fly toward the Earth at supersonic speeds from a record 23 miles above the Earth, breaking the sound barrier... with only his body. During a dress rehearsal last Thursday, he made it more than half-way, ascending from the New Mexico desert in a helium balloon, and jumping from more than 13 miles up. It's said that he is one of only three people who have jumped from such a height and free-fall to a safe landing. He's also the first to do so in 50 years.

He's even caught the attention of NASA, where engineers working on astronaut escape systems for future spacecraft keeping an eye on the skydiver. Here's where things get insane: Baumgartner took a 100-foot helium balloon and pressurized capsule which lifted from Roswell, New Mexico last Thursday morning. He then jumped at 71,581 feet - 13.6 miles - and landed safely just 8 minutes and 8 seconds later.

Felix reached mind-blowing speeds of 364.4 miles per hour, and was in free fall for 3 minutes and 43 seconds, after which he pulled his parachute. Considering that commercial jets cruise at just over 30,000 feet, he was pretty high up there. After just one more trial, Felix will attempt at jump from 120,000 feet, or 22.8 miles. This will happen in a launch window between July until the beginning of October, which is based on the optimal weather at the Roswell site.

Keep in mind that at 120,000 feet ... there is no atmosphere to sustain human life. To the body, it's no different than being in deep space, save from possibly more radiation shielding from the little atmosphere you have. You need the full protection of the pressure suit.

When Baumgartner does this new jump, he will be travelling at an insane 690 miles per hour, or Mach 1. He should descent for between 15 and 20 minutes.

I can tell you right now - this would be the single most exciting thing most people could ever dream of doing, while simultaneously being the most frightening.