I'm beginning to think that HTC named their latest smartphone One S for a reason, it has just smashed every single other smartphone in Basemark ES 2.0 Taiji, cementing themselves into the number one position with the best scores for the benchmark. 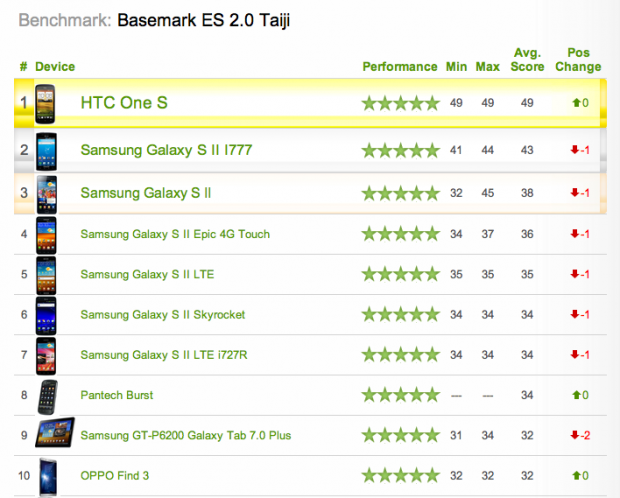 If we look at the top 10 devices, 7 of them are Samsung-built devices, with the Pantech Burst sliding into #8, and OPPO Find 3 with #10. Samsung fill out everything else but #1. The closest device is Samsung's Galaxy S II I777 which scores a minimum, maximum and average frame rate of 41, 44 and 43, respectively. HTC One S scores 49, 49, and 49, respectively.

Kicking the shiny butt off Samsung's closest smartphone. This is a sure win for HTC, something that people should definitely be checking out when they want to purchase a new smartphone. Considering that HTC's next phone to be listed in the benchmark is their Velocity 4G at #17, this is a huge win for HTC.