Ah, NVIDIA charts. The memories are flooding back now, it feels like so long since I've seen them, but they're back, and in force. NVIDIA's latest charts are for their 28nm-built, Kepler-based NVIDIA GEFORCE GTX 680, caps intended. 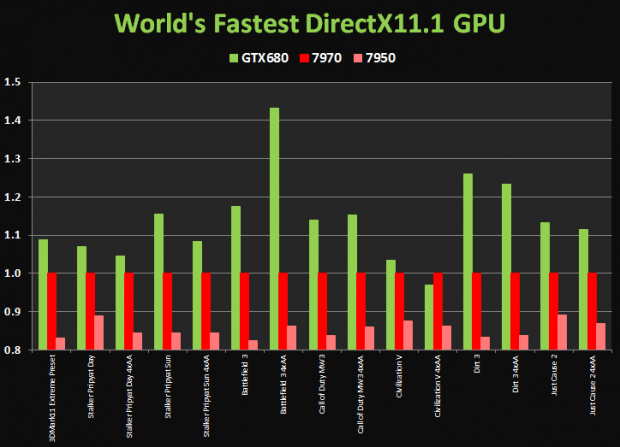 If the above charts are true, which most of the time they are not because it's really just a closed-world internal test by NVIDIA themselves, then we're looking at an amazing 40-percent increase over the AMD Radeon HD 7970 in some tests. 15 tests were used, from 7 games/benchmarks. All benchmarks were run with AA, then again without AA.

The one test that got my GPU juices flowing was the Battlefield 3 test with 4xAA, look at those improvements. If only I had the time to play Battlefield 3, I'd probably get 1 or 3 of these new GEFORCE GTX 680's. In the end, it looks as though that crown AMD have graced on their head, is about to get a can of whoop ass thrown at it. Green Team, unite!