IBM have reached quite the milestone, with researchers at the company demonstrating a prototype optical chip that is capable of transmitting up to 1 terabit of data per second. Engineers managed to built the Holey Optochip using readily available components, meaning that the chip could actually be manufactured in high volumes for commercial implementation sooner, rather than later. 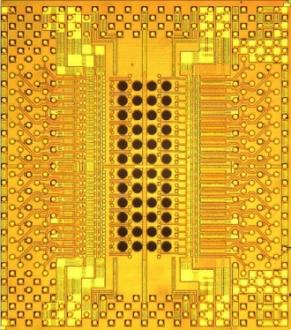 IBM created the Holey Optochip as part of their continued efforts to use light rather than electronics over wires to transmit huge amounts of data. Surprisingly, the Holey Optochip was created using a standard 90nm-based CMOS chip, which they then drilled 48 tiny holes through the back of it.

This is all capable from a chip that is one-eighth the size of a dime, and is powered by less than 5 watts of electricity. Absolutely mind-blowing. Revisions are already beginning, where we could see an increase to 25 gigabits per second, pumping the speeds up to 1.2 terabits per second. IBM Optical Links Group manager, Clint Schow, told Ars Technica that IBM won't be mass-producing the chips, but they could become commercially available within a year or two, for between just $100 and $200 each.