Next-gen consoles and next-gen graphics engines are something that I have quite close to my heart. It's something I think needs to really evolve. I see the AAA gaming market as something that is stuck inside of a bubble. 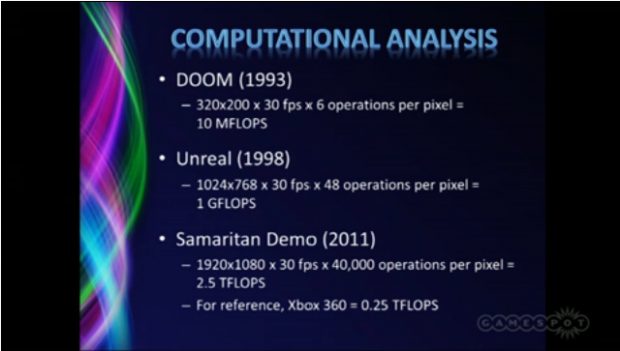 The cause of that bubble? Consoles. I've covered this a fair bit in a few of my editorials, where I've talked about smartphones and tablets getting close to, and will eventually pass the power in current-gen consoles. Once this happens, consoles will have a hard time selling, unless we see next-gen consoles.

The previous generation of consoles teased "Full HD gaming", but delivered sub-HD gaming. Most AAA titles run at a resolution lower than 1280x720 and at frame rates less than 30fps. Of course, there are some games that run at either slightly higher resolutions, or slightly higher frame rates, but never both. We don't see games like Halo, Gears of War, Uncharted or Metal Gear Solid running at 1080p with 30fps.

For Unreal Engine 4, it could be much more than that. Much, much more.

Rumor has it UE4 could be ready sometime in 2014, but Epic's Vice President, Mark Rein, told G4 that we should expect a reveal of UE4 sometime this year. He's quoted saying:

People are going to be shocked later this year when they see Unreal Engine 4 and how much more profound an effect it will have.