NVIDIA has warned that its current quarter's sales would fall short of expectations. NVIDIA, whose fourth quarter ends January 29, has said it now expects quarterly revenue of around $950 million. 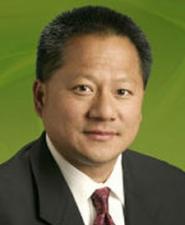 This is short of their original expectations of approximately $1.066 billion. NVIDIA have said that the shortfall is due in part by the PC-market impact from a global hard-drive shortage because of the unfortunate and devastating Thailand floods.

Because of this, fewer systems were shipped, and some PC makers decided to scale back on graphics to account for their inflated hard-drive costs. NVIDIA have also said that its Tegra 2 mobile chip business declined more rapidly than it had expected.

NVIDIA is currently ramping production for Tegra 3, which will replace the Tegra 2 chip over time.