Just 72 hours after the debut of Apple's iBooks textbook store, there have been 350,000 downloads of textbooks. According to Global Equities Research, who monitor Apple's iBook sales through a proprietary tracking system, more than 350,000 textbooks were downloaded from Apple's iBooks Store within the first 72 hours of availability. 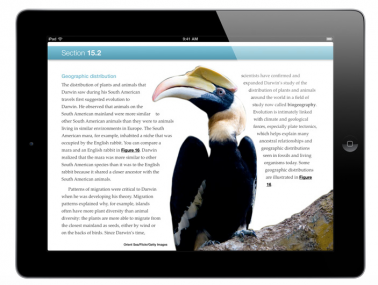 There were 90,000 downloads of iBooks Author, Apple's free textbook-creation tool, during the same 72 hour period. With 350,000 textbooks downloaded in a short amount of time, one would come to the conclusion that iBooks is [so far] a success. This success is actually great, not just for Apple, but for textbook publishers who are set to make more money on books sold through iBooks than they do through retail.

According to Global Equities Research, the supply chain markup on textbooks ranges between 33- and 35-percent. Considering there's methods between publisher, distributor, wholesaler and then retailer, cutting out multiple middlemen means only good things for textbook publishers.