Nielsen have just posted their latest figures on smartphone sales in the U.S. and it shows that Apple's latest iPhone 4S helped claw back some much needed ground against the constant onslaught of Android-powered phones. In the last three months of 2011, roughly 45-percent of U.S. shoppers who purchased a new smartphone, chose an iPhone. 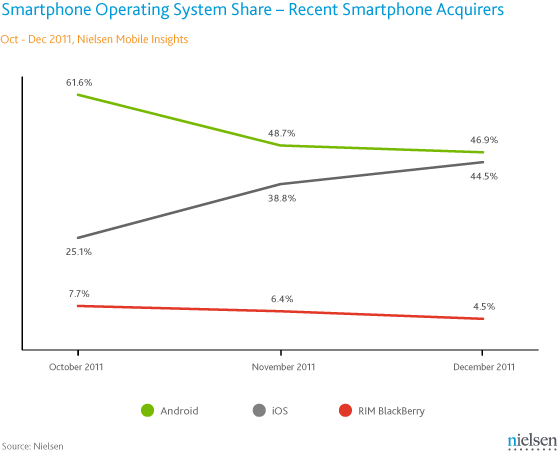 This is up 25-percent from the previous quarter. Android sales were 47-percent, down from a smackdown of 62-percent in the previous quarter. Apple's sales numbers were slipping as people were waiting for the new iPhone to launch, where Google were seeing strong sales thanks to Samsung's Galaxy S II. Apple also dropped pricing on the 3GS to zero up-front when purchase on contract, and introduced an 8GB iPhone 4 for just $100.

RIM's BlackBerry is still here, taking third spot, but seeing its share drop from 7.7-percent to just 4.5-percent in Q4 2011. This is quite worrying as RIM just released the Bold, Curve and Torch models.