CES 2012 - Earlier on today we visited the Sapphire hotel suite at the MGM Grand here at CES in Las Vegas where we met up with Bill who was kind enough to give us an introduction to some of the new toys they had on display.

First up we got a quick look at Sapphire's X79 motherboard along with their Radeon HD 7970 video card where Bill mentioned they are seeing good performance since both products are able to support PCI-E 3.0. 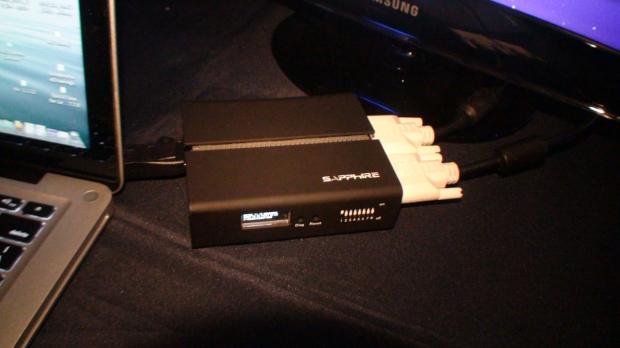 Next up we got a look at Sapphire's first AMD based Mini-PC called the Edge-HD3 and it is based on the AMD APU E450 processor which is clocked at 1.6GHz and Radeon HD6320 graphics. It comes with 4GB of DDR3 memory, a 320GB HDD, USB 3.0 and more. Bill mentioned they are currently at pre-production level and they should be shipping around the middle of February and go on sale for around $300 USD.

Finally we got a look at the Vid-2X which is a new product from Sapphire that allows to take a Thunderbolt connector and output display to two monitors over DVI. It supports resolutions up to 1920 x 1080. Check out the video above for a full look.