CES 2012: America's first 16-megapixel cameraphone is here, folks. HTC's Titan II is a heavyweight against other phones, sporting a 4.7-inch screen and 1.5GHz processor. The 16-megapixel camera is capable of taking 4640x3840 (!) photos, as well as built-in support for AT&T's 4G LTE network. 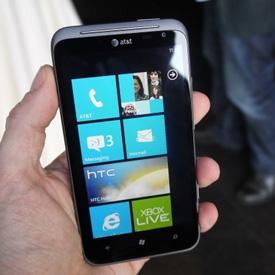 It measures in at 5.2 x 2.7 x 0.4-inches, is a little shorter, and wider, than Samsung's Galaxy Nexus. The downside to this phone is its somewhat low resolution screen: just 800x480. Titan II sports Microsoft's Windows Phone Mango OS, and processor wise, while it may be a 1.5GHz chip, it's only a single-core. The chip is a Qualcomm Snapdragon S2.

It seems all of the work went into its camera, and LTE capabilities. PC Mag had some hands-on time with the Titan II and said while the phone has a 16-megapixel camera, it doesn't mean the pictures are all high quality. Filling out the specs is HSPA+ back up to its LTE connection, the standard Wi-Fi 802.11 b/g/n, Bluetooth, 16GB storage (no memory card slot!), and a 1730 mAh battery. AT&T and HTC did not announce a price or release date for the 16-megapixel-packing Titan II.