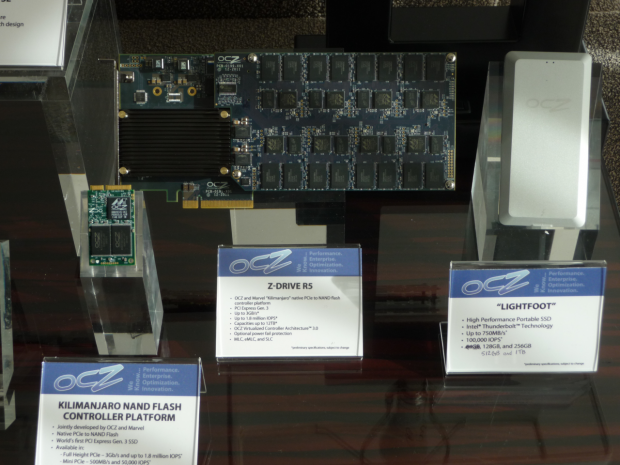 Usually when we start talking about PCIe to flash controllers (as opposed to SATA to flash) we are talking about Fusion-io. Well there is a new game in town and this game is being played on the PCIe 3.0 field. The Kilimanjaro controllers I've seen so far were branded with both OCZ and Marvell names.

In the shot above we see the enterprise Z-Drive R5 which uses an 8x PCIe 3.0 slot, can push up to 3GB/s and churn around 1.8 million IOPS as long as your processor or processors can handle the load. OCZ it talking about capacities up to 12TB. There should be a few different models based on capacity and flash type, either MLC, eMLC or SLC. No word on pricing but I think Honda Civic range should sound about right.

Of a little more interest to our readers though is the smaller version that uses PCIe 3.0 to NAND in what looks a lot like mSATA form factor. We are seeing this socket all over the place today but we can't tell you too much about it, watch for some videos later today from motherboard manufactures on TweakTown.